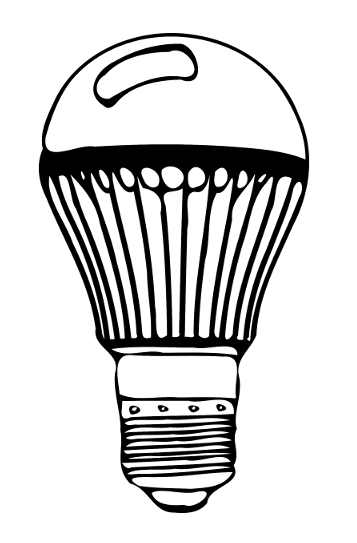 LED lighting seems to be rapidly replacing every other type of lighting technology. Over the past 10 years I’ve noticed places such as restaurants, streets, cars, schools, shops, and homes update their lighting fixtures to use LEDs. On the surface, the move totally makes sense. LED lights are extremely energy efficient, last many years longer than traditional incandescent bulbs, and don’t horribly poison you and your family when they break open like compact fluorescents. There are a lot of very good reasons to love LED lighting. But there is a huge problem with most LED light bulbs people are putting in their homes…. the light they emit looks unatural.

It's About Spectrum, not Color

CRI has little to do with the color of the light and everything to do with the emitted spectrum of the light. Sunlight has a continuous spectrum, meaning the light contains every color and objects hit with the light can reflect every color. Light sources with a poor CRI however, will have gaps in their spectrum, indicating missing colors that can never be reflected by objects the light is hitting. The result is a light that makes furniture, people, and other things in your house look odd and unnatural. Gross.

A Lack of Lables

Okay. But LED lights still have a ton of advantages over incandescent bulbs. No one is denying that. So someone MUST be making LED bulbs with a higher CRI…. right? Yes. But apparently, it is hard to do. When I tried to find LED bulbs with a 90+ CRI at Lowes, Fry’s, and Target, I found ZERO bulbs that even stated what their CRI was! The manufacturers didn’t even bother putting it on the packaging. My guesses why:

On Amazon I had more luck. They don’t let you filter by CRI (FIX THIS AMAZON) but if you search for something like “LED bulb CRI” you’ll find a few different types of LED bulbs with labels proudly announcing their higher CRI.

I have been trying out various color temps and bulb types of Hyperikon’s 93 CRI bulbs and have been surprised at how incandescent-like they look.

In the past, I had ignorantly installed dozens of standard LED bulbs, and after replacing them with the more color accurate bulbs, my house interior feels naturally lit. It’s like I have turned off an awful Instagram filter in front of my face, that I never realized was always on.